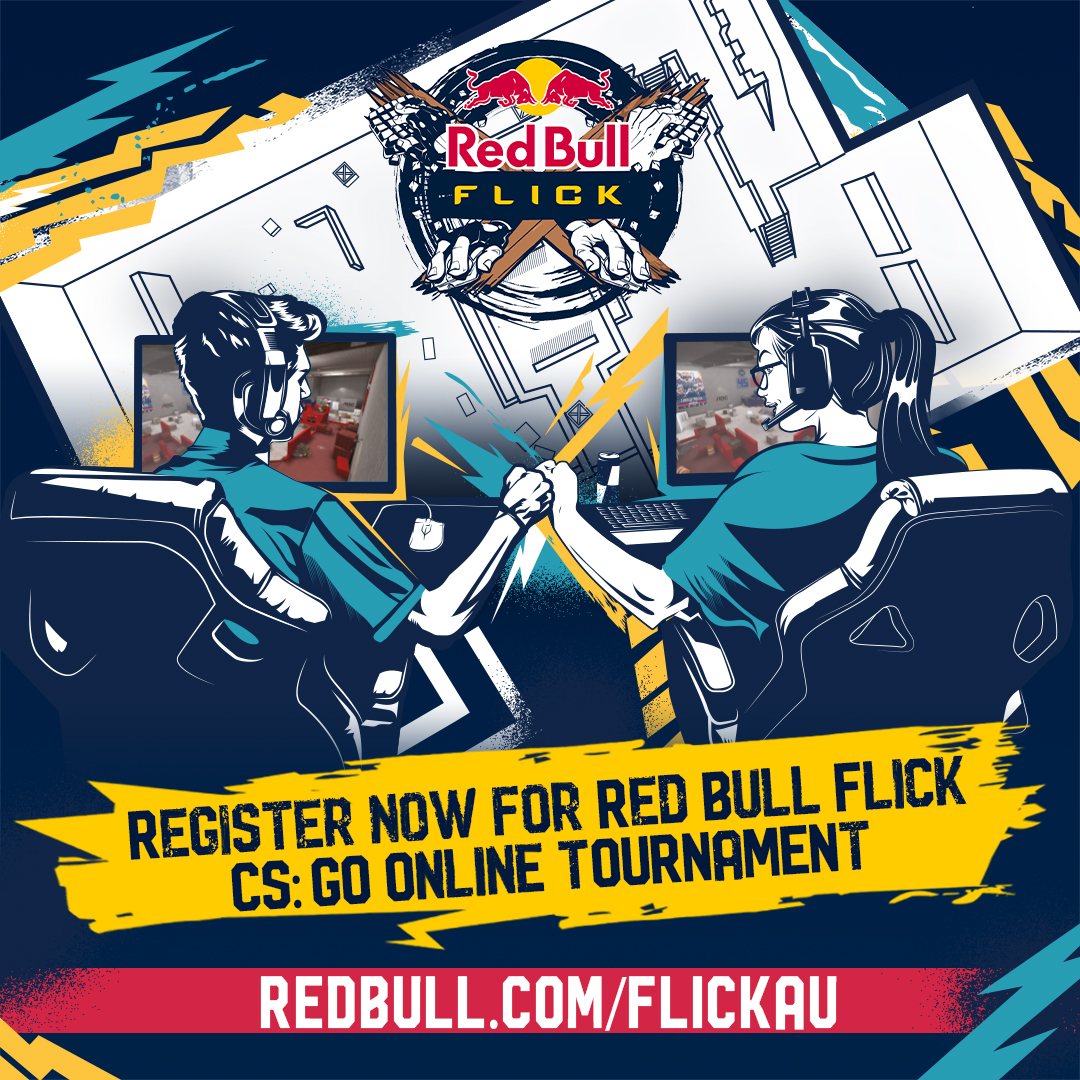 Red Bull Flick is a new 2v2 CS:GO tournament giving amateur players from around the world the opportunity to face the best pro players in custom maps.

Sydney, Oct 21: International Counter Strike: Global Offensive (CS:GO) tournament Red Bull Flick brings a brand new game mode to fans as the competition launches in Australia. The exclusive game mode titled ‘Hold The Flag’ will be available to players along with brand new maps and a suite of unique settings, with registrations for the tournament opening today.

Red Bull Flick introduces a unique game mode to CS:GO with Hold The Flag, where dynamic duos face off in a King-of-the-hill style match up. In the grassroots tournament setting, Red Bull offers the chance for amateur and pro players to level up with the aim to reach the live finals. To win each match, pairs will need to secure and defend the flag point for 45 seconds on maps especially designed for the new game mode. Hold the Flag comes with five new custom maps with unique settings and game mechanics to keep the competition varied; Castle, Garden, Speedway, Matrix and Himalaya are all available to play now on Steam.

Registered players will frag it out in a series of 8 online qualifiers supported by ESL Australia, across November 16-19 and 23-26, where they’ll score the opportunity to play alongside professionals and amateurs alike. The Grand Final will take place on November 29, and will be live streamed for viewers from Red Bull’s Twitch Channel. The Red Bull Flick Grand Final Winning Duo will score a custom built PC each, valued at $3,000AUD.

In the lead up to the qualifiers, Red Bull will be showcasing the exclusive game mode and brand new maps live on the official Red Bull Twitch channel. Renowned gaming personalities and CS:GO pros alike, including TV alumni and gamer Stephanie ‘Hex’ Bendixsen, gaming streamers Paladin Amber, Iamfallfromgrace, Tom ‘Apocdud’ Henry and AFL Legend Mitch Robinson, will face off under the Hold the Flag conditions.

Players and fans can tune in at twitch.com/RedBullChannelTwo on Tuesday, November 10 at 7pm AEDT to learn the best ways to tackle the new maps and pick up some fresh strategies from potential competition.

“The introduction of a brand new game mode to CS:GO is an exciting challenge for the community. With new rules, new objectives and importantly new maps, it creates an even playing field for amateurs and pros. Definitely looking forward to seeing new and familiar strategies brought to the game.” said Apocdud, one of Australia’s most prolific CS:GO players for Chiefs Esports Club.

“We’re excited to be working with Red Bull on presenting a new and innovative game mode to our Australian esports fans. Hold the Flag offers a whole new experience for CS:GO veterans and amateurs looking to level up their game and get involved.” Said Josh Inman, Operations Manager at ESL Australia.

Players who think they have what it takes can register with their Dynamic Duo partner from today at redbull.com/flickau.

Use the hashtag #RedBullFlick and tag @redbullau on Twitter and other social media channels and visit redbull.com/flick for more information, including format, rules and eligibility, and additional announcements!

NOTES TO THE EDITOR

Please find additional media assets including a Hold the Flag map GARDEN fly through, as well as images and artworks below: https://drive.google.com/drive/folders/1wwnH1vp2ndGy_2oyiZX-gQfBDgQJHDRH?usp=sharing

Red Bull gives you wings – in gaming and real life. We have built up personalities in gaming and hosted and supported esports events for a long time. Some of the most notable athletes promoted include streaming superstar Ninja, the 2019 Dota 2 world champions OG, and many more. We are partners with the League of Legends Global Esports Events and numerous regional leagues around the world, including the League of Legends European Championship (LEC), Campeonato Brasileiro de League of Legends (CBLOL), and League of Legends Championship Series (LCS). Apart from Red Bull Solo Q, we host tournaments – like the Red Bull Kumite – that gives world class players the chance to stand out. Explore the world behind the can and visit the hub on redbull.com/esports or redbull.com/gaming. Our hubs feature the latest trends in gaming, esports and lifestyle. It is a focal point for getting information about exciting upcoming Red Bull events, plus there is a section aimed at players in particular who want to improve their skills.

Founded in 2014, the Chiefs are the premier Esports & Gaming Entertainment club in Australia & New Zealand. Our teams compete on the world’s largest esport stages and our content creators entertain thousands of people online every single week.

Our academy program is designed to nurture up and coming talent within our region and get players into a competitive environment where they can grow both in and out of the game. Our developmental philosophy exists across all our titles where our core belief is developing and supporting the region’s next generation of esports stars.