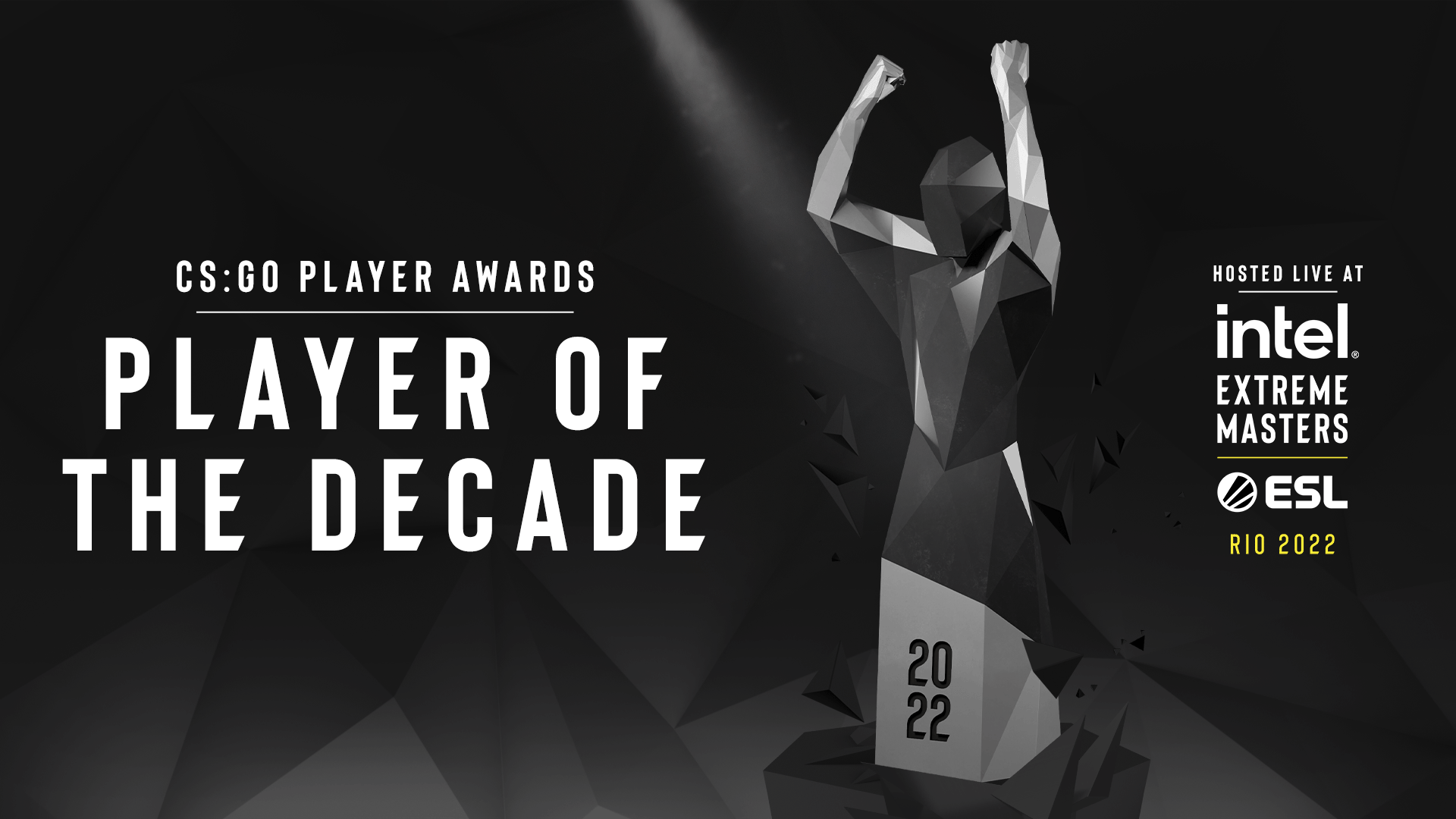 Celebrating 10 years of Counter-Strike: Global Offensive, the world’s very best players of the past decennium will see their names carved into esports history

Cologne/New York – ESL Gaming, a part of ESL FACEIT Group, today announced the Counter-Strike: Global Offensive (CS:GO) Player awards cycle, with the first edition taking place at one of the most prestigious esports tournaments in the world, Intel® Extreme Masters (IEM) Katowice 2023. To kick off the cycle and to sum up a decade of best CS:GO action in honor of the 10th anniversary of Valve’s top esports title, the Esports Player of the Decade will be awarded during the IEM Rio CS:GO Major Championship.

All players from around the world who have ever reached the playoff stage during the past 17 CS:GO Major Championships, starting with DreamHack Winter 2013 and ending with the PGL Antwerp Major 2022, are eligible to run for the Player of the Decade title. Analysts, historians, and pros alike vote to determine the single most influential player of CS:GO esports’ first ten years. The award ceremony will take place in front of thousands of fans, live at the Jeunesse Arena in Rio de Janeiro, Brazil, on Saturday, November 12. IEM Rio is the first-ever CS:GO Major to be held in South America and with tickets being sold out within one hour after release, it is highly-anticipated by fans worldwide. The addition of the award ceremony to the event promises to make it even more exceptional.

Furthermore, commencing in 2023, ESL Gaming will hold the annual CS:GO Player Awards ceremony at IEM Katowice in the following categories:

Winners of each category will be chosen by 100 top CS:GO players in the ESL world ranking. They will cast their votes to the players who in their eyes are the most deserving nominees to claim the respective titles. The award ceremony will take place on stage in front of a live audience in the Spodek Arena in Katowice, Poland.

“The most resounding way to give someone validation as the greatest CS:GO player in the world is if he or she is selected as such by all of the world’s best players. The CS:GO Player Awards are a platform for this to happen and our role in it is to facilitate the process and elevate the occasion,” said Michał “Carmac” Blicharz, VP Product Development at ESL Gaming. “We could think of no place that fits better to decorate the CS:GO Player of the Decade than the IEM Rio CS:GO Major.”

For more details, make sure you visit the dedicated CS:GO Player Awards page and stay tuned as more information will be revealed in the upcoming months.

About Intel® Extreme Masters Intel® Extreme Masters is the longest-running global professional esports tournament circuit in the world. Started in 2006 by Intel and ESL, the competition has now traveled to over 30 cities around the globe and conducted tournaments for 11 different competitive gaming titles. Esports fans from more than 180 countries regularly make IEM events record-breakers in terms of stadium attendance and viewership, with the tournament’s inaugural event in Australia in May 2017 marking the fifth continent for the global competitive circuit. Throughout more than 75 IEM events, over US $11 million in prize money has been awarded to some of the world’s top esports talent (www.intelextrememasters.com).