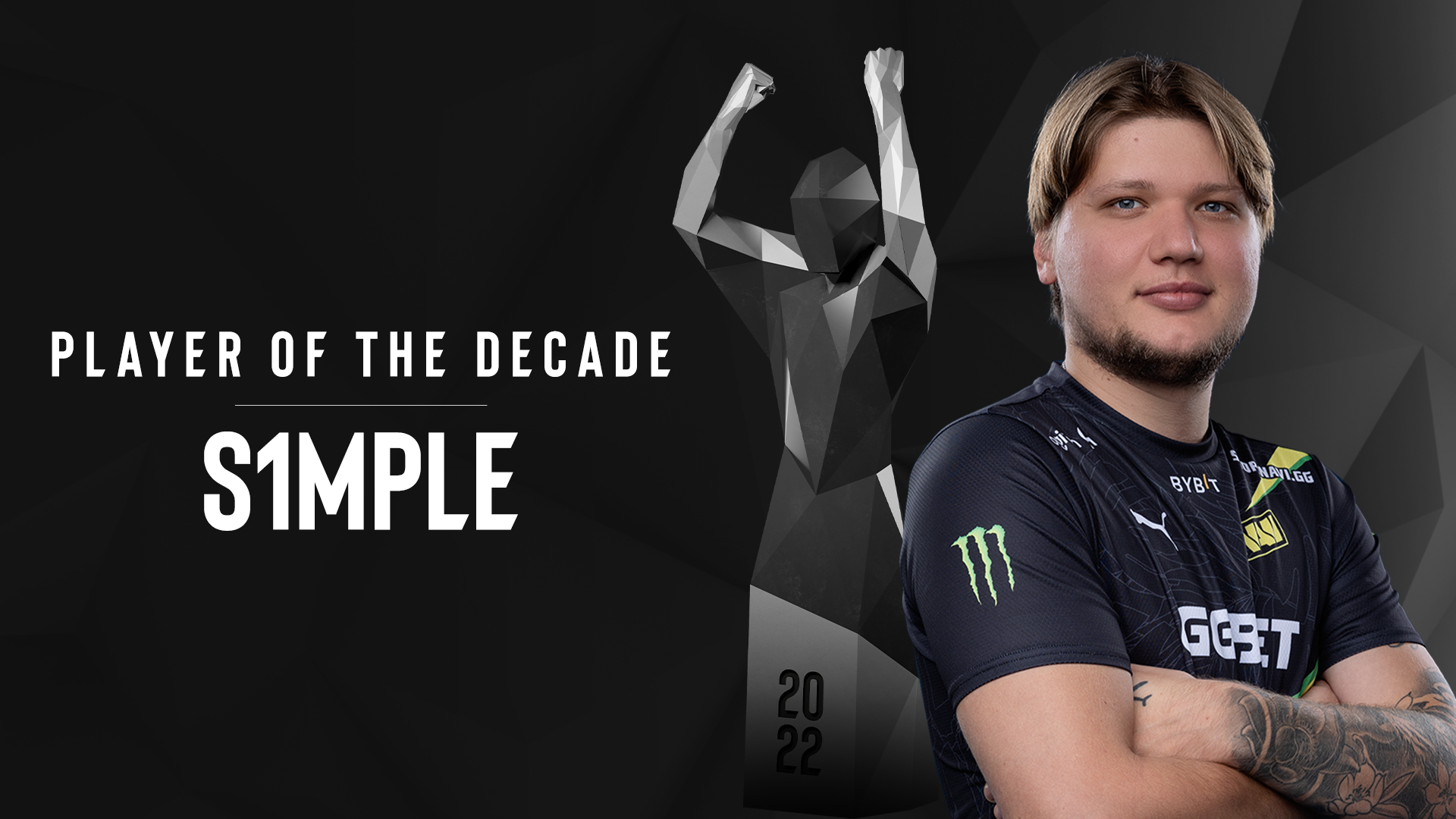 Cologne/New York – Earlier this year, ESL, a part of ESL FACEIT Group, introduced the unique Player of the Decade Award to honor ten years of one of the most popular esports games – Counter-Strike: Global Offensive (CS:GO).

A panel of the 75 most accomplished CS:GO players voted for who, in their eyes, has achieved the most in the last ten years. The player with the most votes received the award right before the semi-finals of the Intel® Extreme Masters (IEM) Rio CS:GO Major Championship on Saturday, November 12, 2022.

In front of a crowd like no other, Oleksandr “s1mple” Kostyliev was announced as the winner and officially crowned the best player of the last ten years. Due to countless achievements, his dedication to constant growth, and his influence on the esports scene – among many other things – the Ukrainian player received the celebratory CS:GO Player of the Decade award.

For a long time, s1mple has been an inspiration to many aspiring players. His professional journey began when he was only 16 years old as he became a rifler at the LAN Dodgers. One of his first big successes was during DreamHack Winter 2014 when he and his team defeated one of the most successful CS:GO teams at that time: Fnatic. During the following years, s1mple was a part of several other teams, including HellRaisers and Team Liquid. While many people already recognized his talent and skill, joining Natus Vincere in 2016 was a dream come true and allowed s1mple to unleash his full potential.

Together with the Ukrainian team, he obtained the Intel® Grand Slam III and won first place in ten of the most prestigious esports events, including ESL One New York 2016, IEM Cologne 2021, and the PGL Stockholm Major in 2021. S1mple himself has been awarded a record number of MVP titles, becoming indisputably one of the greatest players of all time. Winning the CS:GO Player of the Decade award is yet another milestone in s1mple’s career and sums up all of his achievements from the last years.

“I feel good about getting the award although the Major trophy was important for me this time,” said Oleksandr “s1mple” Kostyliev. “And I still think that there is one player that deserved this award as much as I did – dev1ce. I will try my best to achieve the same results as he did. There’s no limit to perfection.”

When referring to the most influential players of the last decade, it is hard not to mention Nicolai “dev1ce” Reedtz as well. Dev1ce is known for winning the highest number of CS:GO Majors and receiving the most MVP CS:GO Major titles. For over eight years, he is having an enormous impact on the esports scene while representing some of the best teams, like Astralis and Ninjas in Pyjamas. His numerous achievements and dedication to the community made him a very close runner-up in the vote for the CS:GO Player of the Decade award.

With IEM Katowice 2023 on the horizon, CS:GO fans from around the globe can now look forward to  the first annual CS:GO Player Awards in the following categories:

The IEM Rio Major continues tomorrow, Sunday, November 13, with the final two teams battling it out in the Grand Finals for a share of the $1,250,000 total prize pool and the coveted Major Championship title. Make sure not to miss any of the action live at the sold-out Jeunesse Arena in Rio de Janeiro, during the live ESL broadcasts HERE, or via dedicated broadcast partners worldwide.

The ESL FACEIT Group is the leading competitive games and esports company. At EFG we create worlds beyond gameplay where players and fans become community. The company is built on the great legacy of the world-renowned ESL, FACEIT, DreamHack and DreamHack Sports Games brands. We harness this legacy to further innovate and develop the esports and gaming landscape worldwide. Working with our developer, publisher, brand, and media partners, we deliver products and experiences that accelerate gaming culture and make gamer communities come together. Join us on the journey as we help gaming communities thrive by creating worlds beyond gameplay that unite players, fans, and creators around the esports and games they love.

ESL creates a world where everybody can be somebody. For more than two decades, we have been shaping the industry and leading esports and gaming innovation globally across the most popular video games, creating a comprehensive ecosystem with opportunities for players to go from zero to hero and for fans to witness the best stories esports has to offer. The ESL portfolio consists of high-profile products such as the ESL Pro Tour, Intel® Extreme Masters, the Snapdragon Pro Series, and many more, ranging from grassroots to global elite competitions. ESL is part of ESL FACEIT Group, the leading competitive games and esports company.